Conflict exploded in a courtroom Monday after a judge apparently dared an assistant public defender to go out back and fight.

The Brevard judge allegedly grabbed the assistant public defender and punched him in the head.

A video of the incident has been released, which can be viewed here. 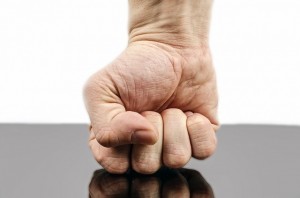 The judge responded with the following statement: “You know if I had a rock I would throw it at you right now. Stop pissing me off. Just sit down. I’ll take care of it. I don’t need your help. Sit down.”

The judge then apparently takes the conversation one step further by shouting back this proclamation: “I said sit down. If you want to fight lets go out back and I’ll just beat your ass.”

The men then disappear off camera, where loud banging can be heard.

According to others in the courtroom, the men stepped into a hallway behind the courtroom that is typically used by judges and jurors.

The video recorded one of the men off camera saying: “I’m not kidding. You wanna [expletive] with me?”

The judge returned to the courtroom out of breath, but retakes his seat.

Those seated inside courtroom applauded.

The judge was not arrested, and reports indicate that charges will not likely be filed. However, it does appear that the incident will be reported to the Florida Bar.

The video demonstrates that the judge loses his tact and sense of control. It will be interesting to see how this courtroom scuffle plays out – it seems odd that if this was an unprovoked attack, like the public defender’s office is claiming, why no criminal charge was filed. Regardless, judicial discipline will likely come as this case demonstrates a violation of judicial ethics, especially since it appears the fight erupted after the judge wanted someone to waive a constitutional right.

If you or someone you know has been charged with or is under investigation for a criminal offense in Cocoa Beach, Cape Canaveral, Melbourne or any nearby area, please call a Brevard County Criminal Defense Attorney at Whittel & Melton at 866-608-5529 for a free initial consultation. You can also contact us online anytime to find out more about how we may be able to assist with your defense.