A total of 10 people were arrested in an undercover operation cracking down on unlicensed contractors resulting in civil citations totaling $9,675.

The sheriff’s office, working with the Hernando County Building Department, conducted a two-day sting from July 1-2 in order to combat what has been called a growing problem. 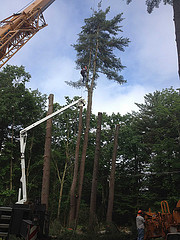 The arrests made were in several trades, including: tree removal, tile installation, electrical, roofing, plumbing, general and residential contracting.

All those arrested allegedly advertised their businesses publicly and did not hold the appropriate licenses for the work they agreed to perform, which is a first-degree misdemeanor.

Two arrests were made for people driving on suspended driver’s licenses.

All of those arrested apparently had a combined total of ten misdemeanors and four felony previous arrests in Hernando County, including grand theft and organized fraud.

For the most part, the crime of unlicensed contracting is recognized as a first-degree misdemeanor offense. This crime is punishable by up to one year in the Hernando County Jail and up to a $1,000.00 fine. However, it is important to point out that some offenders can be charged with a third-degree felony with penalties that carry up to five years in state prison and a $5,000.00 fine. These felony offenses include:

Aside from potential fines and jail sentences, a person convicted of contracting without a license is often subject to court-ordered restitution. This is usually set in place to reimburse the alleged victims for substandard work or substandard materials that caused a loss. In many cases, restitution amounts can be tens of thousands of dollars. Failing to pay these fees or failing to pay them in timely manner can lead to the defendant being held in contempt of court.

If you have been accused of unlicensed contracting in Spring Hill or Brooksville, please call a Hernando County Criminal Defense Attorney at Whittel & Melton at for a free consultation at 352-666-2121 or contact us online.