After the three day operation, 101 suspects were arrested and 15 search warrants were served.

Of those detained, 92 are repeat offenders, with a total of 955 prior arrests and more than 1,500 criminal charges.

Deputies and detectives claim they were able to seize $13,378, six firearms, one vehicle, more than two pounds of marijuana and more than three ounces of methamphetamine and 45.1 grams of hydrocodone. 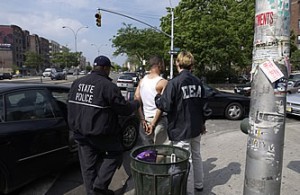 The 101 suspects arrested were charged with 325 offenses, including 180 felonies, 145 misdemeanors, 32 outstanding warrants for 32 felonies and 17 misdemeanors, 5 warrants from other jurisdictions and one fugitive from justice.

Reports indicate that 40 of the suspects were receiving public assistance at the time of their arrest, and 32 out of the 101 have served time in prison before.

The sweep was part of the agency’s “Proactive Community Attack on Problems”, also known as the “PROCAP” program, that involves collecting daily crime data, studying trends in the data and delivering that information to supervisors and deputies.

When conducting a drug sweep, police usually raid homes and businesses where they believe drug activity is taking place. Numerous people can be arrested in these operations and charged with drug possession or distribution, as well as additional crimes like weapons charges and probation violations. While police may believe that those they are arrest are dealing drugs, many people caught up in these sweeps are innocent bystanders that have no direct connection to the drug trade.

END_OF_DOCUMENT_TOKEN_TO_BE_REPLACED

Cross dressing isn’t a crime, but violating probation can be. Tampabay.com is reporting that Dade City Police Department arrested a 44-year-old man dressed in a black tank top and blue denim skirt Sunday morning after he tried to run from police.

According to the report, a patrol car was making a U-turn on U.S. 301 when they spotted what appeared to be a woman standing behind an abandoned business. When officers shined their spotlight toward the back of the business, and the person took off running into the woods.

The officer and a police dog soon found a man in the woods changing out of the tank top and skirt into a button-down shirt and tan shorts, the report said. After being detained, the man said that he wasn’t a prostitute, and that dressing in woman’s clothing is something he does in his spare time. He ran because he didn’t want to get arrested in women’s clothing.

The man had an open Hernando County warrant for violating his probation on a charge of driving with a suspended or revoked license was also arrested that night by the Dade City police for resisting arrest without violence.

Both of these crimes are misdemeanors which means that the cross dresser could be subject to two years in jail–one year for the violation of probation and another for the resisting and officer without violence charge. Generally, a violation of probation subjects a defendant to the maximum penalty they could receive on the underlying charge. Courts are reluctant to impose jail time for violations that involve failure to pay fines or court fees and are more likely to impose jail or prison sentences on violations that involve new charges.