In the last few months, an increasingly popular synthetic designer drug called flakka has been the culprit of many strange and bizarre crimes.

One man ran nude through a Florida neighborhood, tried to have sex with a tree and told police he was the mythical god Thor. Another ran naked down a busy city street in broad daylight because he believed a pack of German shepherds was pursuing him.

Two others tried separately to break into the Fort Lauderdale Police Department. They said they thought people were chasing them. One even ended up impaled on a fence. 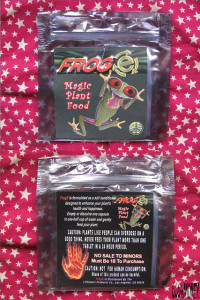 Also known as gravel, flakka is readily available for $5 or less a vial, and is a growing problem for police after bursting on the scene in 2013.

It is the latest in a series of synthetic drugs that include Ecstasy and bath salts, but police say flakka is even easier to obtain in small quantities through the mail. Flakka’s active ingredient is a chemical compound called alpha-PVP, which is on the U.S. Drug Enforcement Administration’s list of the controlled substances most likely to be abused. It is usually made overseas in countries such as China and Pakistan.

Flakka, a derivative of the Spanish word for a thin, pretty woman, is typically sold in a crystal form and is often smoked using electronic cigarettes, which are popular amongst young people and give off no odor. Flakka can also be snorted, injected or swallowed.

Judging from the evidence being seized by police around Florida, flakka is being used quite frequently. Submissions for testing to the Florida Department of Law Enforcement’s crime labs have grown from 38 in 2013 to 228 in 2014. At the Broward Sheriff’s Office laboratory, flakka submissions grew from fewer than 200 in 2014 to 275 already, in just the first three months of this year.

According to the National Institute on Drug Abuse, reports of flakka have also surfaced in Ohio, Texas and Tennessee, but Florida appears to be the leading the nation.

The FDLE is training police to better recognize flakka and the symptoms it can cause.

The biggest challenge is that flakka manufacturers make subtle changes to its chemical makeup, foiling efforts to test for the drug, and it is frequently mixed with other substances, such as crack cocaine or heroin, with unknown effects.

With use for as little as three days, behavioral changes can be severe.

Police say that flakka is a dangerous drug that with prolonged use, can start to rewire the brain chemistry.

Drug crimes are taken quite seriously by police and prosecutors in the state of Florida. A Florida Drug Crimes Defense Lawyer at Whittel & Melton stands ready to help you defeat all Florida drug crimes cases, from possession to manufacturing. If you or someone you know has been charged with a drug crime in Florida, contact us for a free and confidential case evaluation to determine your best defense strategy – 866-608-5529.