Police are under investigation for jokingly filing in a witness statement in the name of a force dog.

Officers in the UK became exasperated when prosecutors asked for an account of a crime from a “PC Peach'” not realizing Peach was the name of a police dog. So they completed the form as if it had been written by the K-9, and signed it with a paw print.

The dog’s statement read: ‘I chase him. I bite him. Bad man. He tasty. Good boy. Good boy Peach.’ 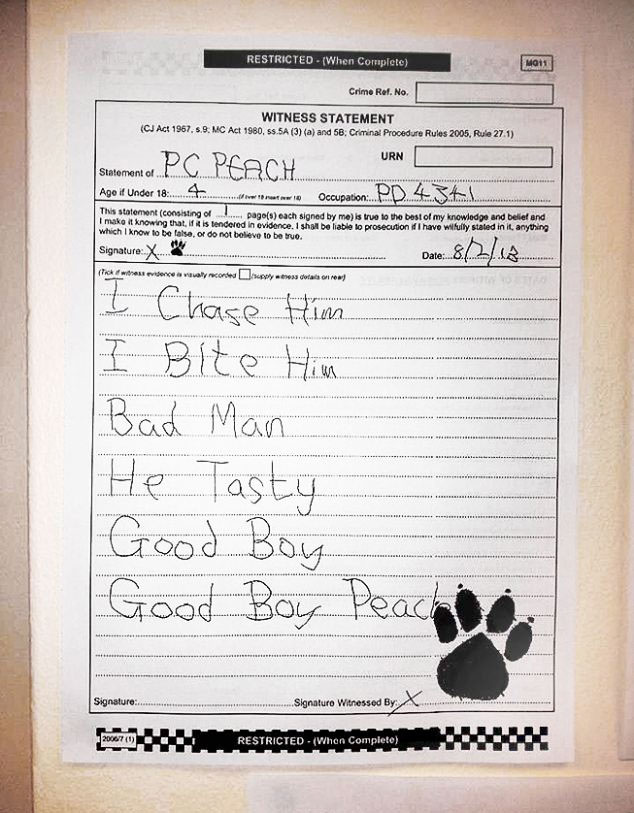 Peach’s statement has gone viral on both cop humor pages on Facebook as well as Twitter, where it was retweeted over 150 times.

The prosecution, who usually works hand-in-hand with the police, did not find the prank as amusing, asking for an internal affairs investigation. It is unlikely that the officer involved will be penalized for this prank.

Joking aside, being charged with a crime is no laughing matter. The government has vast resources to not only investigate and target suspects, but to follow through with prosecution– many times demanding prison time even in exchange for a guilty plea. The stakes are high; this is why it is important to have zealous Florida Criminal Defense Attorney fighting for your rights. At Whittel & Melton, our attorneys are all former prosecutors who know how the beat the prosecution at their own game.

We have represented clients charged with State and Federal drug charges, including: Drug Possession, Drug Cultivation, Drug Production, Drug Manufacturing, Grow House cases, Drug Trafficking, Intent to Distribute Drugs, Drug Distribution, Intent to Sell Drugs, Drug Sale or Drug Purchase and Obtaining Controlled Substance by Fraud. Due to our constant legal involvement in these types of drug arrests we are also prepared to defend your rights against any Asset Forfeiture or Asset Seizure by the government.