Kurt Busch is accused of smashing his ex-girlfriend’s head against his motor home wall Sept. 26 at Dover International Speedway, according to the conclusions of a Kent County (Del.) family court commissioner who granted the woman’s request for a protective order last week.

Busch is scheduled to race Sunday at Daytona International Speedway, where he is slated to start 24th in the Daytona 500.

NASCAR has not disciplined Busch at this time. The organization is waiting for the findings and for a possible decision by the Delaware attorney general’s office on whether charges will be filed for the alleged Sept. 26 assault.

“The Court finds by a preponderance of the evidence that, on September 26, 2014, Respondent [Busch] committed an act of domestic violence against Petitioner by manually strangling her by placing his left hand on her throat, while placing his right hand on her chin and face and smashing her head into the wall of his motorhome,” commissioner David Jones wrote in his findings and conclusions. 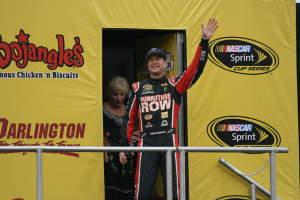 As part of his decision, Jones requires for Busch “to be evaluated by a licensed mental health professional” and complete any further steps for treatment that person recommends.

Busch apparently told police that his ex entered his motor home uninvited, adding that they had broken up a week earlier, and that he cupped her face with his hands while repeatedly asking her to leave.

Jones released his opinion last week, stating that he believes the ex-girlfriend’s version of the events that night was more credible. He added that Busch’s version of events does not make sense and does not match up with the evidence.

Busch has asked Jones to reconsider the ruling.

Domestic violence cases in Florida are usually very sensitive cases that are highly fueled by emotion. These types of cases usually have increased public and media attention, especially when involving a celebrity. A conviction for domestic violence also carries minimum mandatory sentencing, so these cases need to be treated very carefully by an experienced criminal defense lawyer. Even if you have no previous criminal record, you need to have a defense attorney fighting in your corner.

For a free consultation, please call a Volusia County Criminal Defense Lawyer at Whittel & Melton today at 866-608-5529 or contact us online. Do not delay!