The home of the alleged burglary was adjacent to a house the former rapper was renovating as part of his television show for DIY Network called “The Vanilla Ice Project.”

Lantana police claim that after conducting an investigation into possible squatting, they found that several items including furniture, a pool heater, bicycles and pieces of art were taken from the home of a recently deceased man. When officers spoke to Vanilla Ice at the property, they allege that he told them he had purchased it. 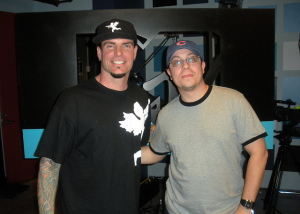 Reports indicate that he had no contract or down payment, and was only filming renovations of the home next door.

Police then obtained a warrant to search Ice’s Palm Beach home where they claim they found the missing items. Ice was arrested and booked into the Palm Beach County Jail. He was later released after posting $6,000 bail.

Following his release, he told reporters that the entire episode was a “misunderstanding.”

Ice was charged with burglary as well as grand theft.

This is not Ice’s first run-in with the law. The entertainer has been arrested four times in the past for domestic assault, brandishing weapons and disorderly conduct. Additionally, he was forced to pay fines after his pet wallaroo and pet goat escaped from his home and wandered his Port St. Lucie neighborhood for more than a week.

According to Florida state statute 810.02, burglary is defined as:

entering or remaining in a dwelling, a structure, or a conveyance with the intent to commit an offense therein, unless the premises are at the time open to the public or the defendant is licensed or invited to enter or remain.

If Ice is convicted of burglary, he could face up to 15 years in prison and $10,000 in fines. Grand theft charges are even more complicated than burglary charges. The potential penalties associated with a grand theft conviction can vary. Consequences depend on the total value of the items stolen.

It will be interesting to see how this case plays out. Burglary and theft charges are quite serious and must be dealt with right away. If you have been accused of or arrested for a theft charge, a South Florida Criminal Defense Lawyer at Whittel & Melton can help. Call us today at 561-367-8777 or contact us online for a free consultation to discuss the facts of your case.