Marion County sheriff’s deputies allegedly removed 212 grams of methamphetamine Thursday from a house in the 100 block of Southwest 87th Place south of Ocala.

The discovery was apparently made when the caretaker of the home arrived to drop off some mail, according to a MCSO report. The owner of the house does not live at the home.

Deputies claim that when the owner opened the back door of the property, he saw someone run into the front bedroom. The man told police that he confronted the person, who apparently told him that someone else was in the camper in the backyard. 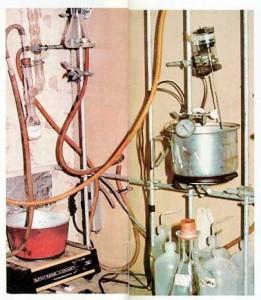 The Unified Drug Enforcement Strike Team arrived at the scene and reported finding 212 grams of meth in paint cans.

Authorities said the investigation is ongoing.

Also known as “crystal meth,” “crank,” “ice” or “chalk,” methamphetamine is a highly addictive drug that is not only extremely dangerous, but one which has grown increasing popular in Florida and throughout the United States. Florida law enforcement and prosecutors combined have recently cracked down on those who produce meth or maintain a meth lab because of the potential danger of the drug and the side effects, which can be fatal.

Characteristically, the term manufacturing brings to mind visions of large scale factory-type operations that generate massive quantities of illegal drugs. However, meth labs are actually extremely portable, so much in fact, that most labs can fit inside the trunk of a car. Trailers, campers and even motel rooms have become popular locations for meth lab operations.

Whether you are a first-time offender or a repeat offender, manufacturing, trafficking or distributing methamphetamines can lead to lengthy prison sentences. Pleading guilty to manufacturing charges or simply relying on a public defender is never a good idea when decades of your freedom are on the line and the stakes are this high. A Drug Crimes Defense Attorney at Whittel & Melton can relentlessly challenge every angle of the prosecution’s case against you. We can challenge the arrest, the search, the seizure and any warrants and statements.

An Ocala Drug Crimes Defense Lawyer at Whittel & Melton can help you aggressively fight these serious charges. Let us put our experience to work for you. Please call us today at 352-369-5334 or reach us statewide and toll-free by dialing 866-608-5529 for a free initial consultation to learn about your legal rights and options or contact us online.